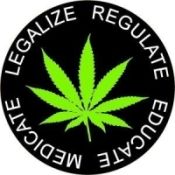 NORML stands for ‘National Organization for the Reform of Marijuana Laws’. NORML exists already since 1970 and is probably the most well-known marijuana legalization group. For the last decades NORML has been the main voice in the public policy debate in the US for people who oppose prohibition and want an end to the practice of arresting cannabis users. NORML is an American organization with local chapters spread all over the country, but in the last few years NORML has become more international and a lot of international chapters have popped up since, including countries as Canada, Spain, Norway and South Africa. NORML’s mission is to move public opinion sufficiently to achieve the repeal of marijuana prohibition so that the responsible use of cannabis by adults is no longer subject to penalty.
> Visit the website of ‘NORML’.

ENCOD stands for ‘European Coalition for Just and Effective Drug Policies’. Encod exists since 1993 and is a European organization which brings European citizens together who believe that drug prohibition is an immoral and insane policy. They’re a pan-European network of currently 140 NGO’s and individual experts involved in the drug issue on a daily base. ENCOD calls for legal regulation as the only sensible and effective way to deal with drug-related problems. One of the main goals of ENCOD is to obtain more transparency and democracy in the drug policy-making process.
> Visit the website of ‘ENCOD’.

The MPP, Marijuana Policy Project, is another large and leading organization from the US in the fight against marijuana prohibition. MPP exists since 1995 and has been lobbying for legislation and running ballot initiative campaigns. They’re also garnering widespread media coverage, lobbying to US Congress to reduce the White House drug czar’s budgets and they’re building coalitions of supportive individuals and organizations to advocate marijuana policy reform. Marijuana Policy Project believes the greatest harm associated with marijuana is prison, so their focus is on removing criminal penalties for marijuana use. In MPP’s vision marijuana should be regulated the same way as alcohol.
> Visit the website of the ‘Marijuana Policy Project’.

LEAP stands for ‘Law Enforcement Against Prohibition’ and is an international organization of criminal justice professionals who want an end to the War on Drugs. The members of LEAP have seen the destruction of the War on Drugs first hand, so this experience on these front lines have led them to call for a repeal of prohibition and its replacement with a tight system of legalized regulation. LEAP’s main goal is to educate the public, the media and policy makers about the failure of the current drug policy and to restore the public’s respect for police, which has been greatly diminished by law enforcements involvement in imposing drug prohibition. LEAP is a US organization and exists since 2002, but has already several international chapters and more international chapters are currently being formed.
> Visit the website of ‘LEAP’.

Drug Policy Alliance (DPA) is an organization from the US and exists since 2000. The DPA is actively involved in the legislative process and seeks to roll back the excesses of the drug war, block new, harmful initiatives, and promote sensible drug policy reforms. The DPA wants a society in which the use and regulation of drugs are grounded in science, compassion, health and human rights, in which people are no longer punished for what they put into their own bodies but only for crimes committed against others, and in which the fears, prejudices and punitive prohibitions of today are no more.
> Visit the website of the ‘Drug Policy Alliance’.

Students for Sensible Drug Policy (SSDP) was founded in 1998 and is an international network of students who are concerned about the consequences of the War on Drugs on society. One of the main goals from SSDP is to encourage young people to participate in the political process, pushing for sensible drug policies. SSDP tries to create change by bringing young people together to have honest conversations about drugs and drug policy. Over the years SSDP has organized meetings and discussions at hundreds of campuses in countries around the globe.
> Visit the website of ‘Students for Sensible Drug Policy’.

Common Sense for Drug Policy (CSDP) is an organization from the US dedicated to reforming drug laws. CSDP takes the War on Drugs wider than solely marijuana prohibition. They also focus heavily on expanding harm reduction by supporting syringe exchanges and other public health measures to reduce harm to users and restrict the spread of drug abuse related diseases. CSDP advocates the regulation and control of marijuana in a manner similar to alcohol.
> Visit the website of ‘Common Sense for Drug Policy’.

Stop the Drug War was founded in 1993 and calls for an end to drug prohibition, and its replacement with some sensible framework in which drugs can be regulated and controlled instead. The main goal of Stop the Drug War is raising awareness of the consequences of drug prohibition by publishing newsletters, articles on their website, writing articles for newspapers all over the world and organizing drug reform conferences on an international level. On their website they also publish their own ‘Drug War Chronicle’ where they cover the War on Drugs already since 1997.
> Visit the website of ‘Stop the Drug War’. Visit the ‘Drug War Chronicle’.

DrugSense was founded in 1995 and operates mostly online and behind the scenes to keep the reform community and the public engaged in their collective mission: ending drug prohibition. Part of DrugSense is the ‘Media Awareness Project’ (MAPinc). MAPinc is a drug news archive and an online network dedicated to drug policy reform by informing the public and promote balanced media coverage.
> Visit the website of ‘DrugSense’. Visit the website of ‘MAPinc’.

HCLU stands for Hungarian Civil Liberties Union. This Hungarian organization exists since 1994 and they have been a leading NGO in the field of drug policy reform advocacy in Hungary since the beginning. HCLU provides legal aid services, they assist harm reduction service providers, arrange conferences and they advocate for more sensitive drug policies through both governmental lobbying and media commentary. Important from a more international point of view; HCLU travels all over the world to do interviews and to make films about drug (prohibition) related issues. All their material is placed on YouTube and with 150+ movies their channel is one of the biggest ‘Drug Reform’ video channels online.
> Visit the website of ‘HCLU’. Visit the YouTube page of ‘HCLU’.

Here below you can see one of the most attention grabbing movies from HCLU. The video is from 2008 and shows Frederick Polak, a Dutch psychiatrist, and Antonio-Maria Costa, Executive Director of the United Nations Office on Drugs and Crime, in a discussion during a Commission on Narcotic Drugs in Vienna about the drug policy in The Netherlands. Mr. Costa clearly didn’t know how to handle this situation, so in the end the easiest way to end this was to simply turn down Mr. Polak’s microphone.