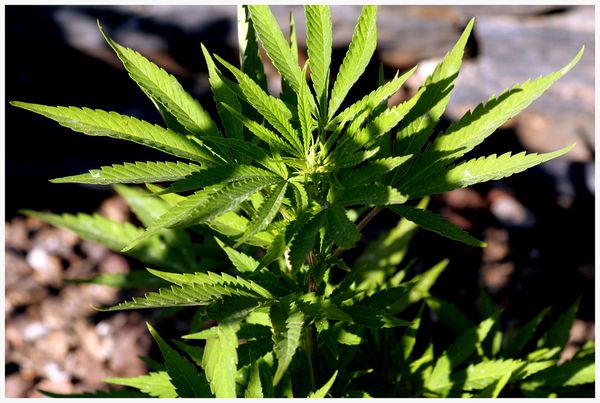 Unlike most plants, cannabis is a dioecious plant; that is, it features specimens of separate sexes (male and female). This means that sometimes, when cultivating marijuana, one does not know what kind of plant he is dealing with until it reveals its sex. Therefore, knowing how to distinguish the gender of each plant will be essential to your work as a grower.

In general, female plants are best for producing buds. Females, in addition to developing much more, boast a higher proportion of cannabinoids in their flowers. Now, if you want to produce seeds for a future crop, it will be necessary to have at least one male strain, even allowing you to cross genetics and obtain hybrids. You will have to wait until the flowering stage, however, to know which is which, and use them accordingly.

With the naked eye, and even during the vegetative stage, it is almost impossible to discern whether you have a male or a female plant. Only the most expert growers are able to distinguish them based on their different growth patterns: male plants are taller and thinner, with more irregular branches, and fewer leaves and internodes, while females tend to grow out to the sides, creating a denser and lusher pattern.

The early flowering stage will be the most suitable to distinguish the sex of the plant as soon as possible and without any doubts. Far from needing magnifying glasses, microscopes or extensive botanical knowledge, you just need to pay some attention and focus on the stems of the newest leaves, especially the area where they join the main stem.

Before the formation of the flowers, the plants develop primordial flora in the area where the branches are joined to the stems. These formations, prior to the development of the flowers, also known as preflowers, are different depending on the plant's sex. Female plants develop a small pear-shaped bag from which protrude two hair-like stigmata, usually white in colour. Males, meanwhile, also feature a tiny sack, but without any protruding stigmata. You can even see that the flower is made up of five sepals, which are an essential part of the formation of the flower's calyx, sustaining the petals. 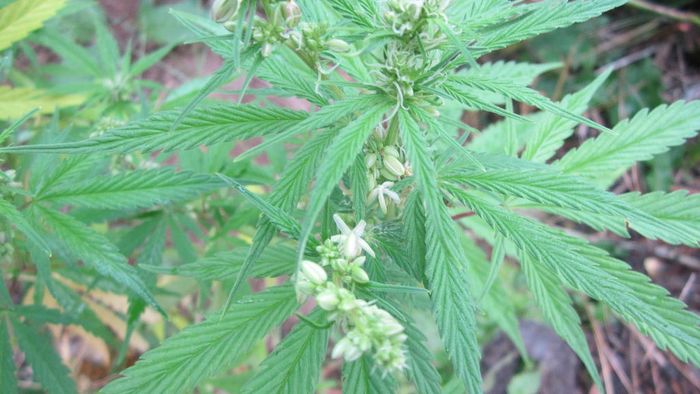 If at this point you still harbour doubts about the sex of your plant, don't worry: as it develops during the flowering phase you will be able to notice more distinct changes that will remove any doubts. For example, you will notice that your male plants begin to display sacs of pollen, forming a cluster that hangs down. When they develop enough, about one or two centimetres, they will open up and drop the small granules of pollen.

Female plants also generate clusters of these bags, but they are more elongated, resin-coated, and have leave two little hairs (stigmata), white, red or purple in colour. These formations will grow until the appearance of the buds, which can swell to large dimensions if given the right care. 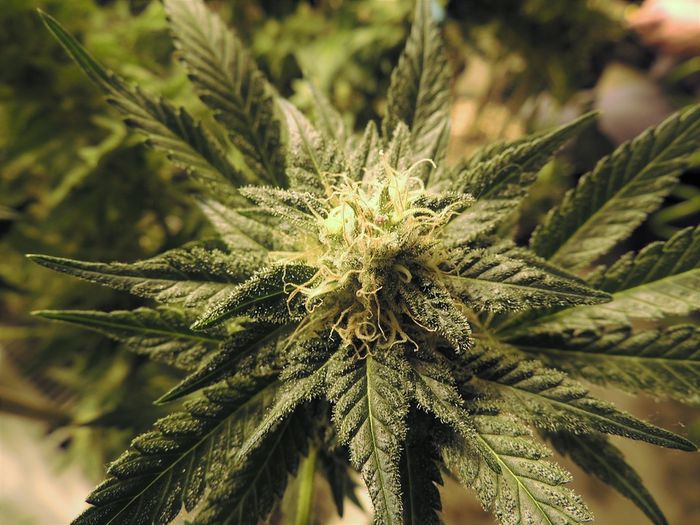 Thus, the more developed your plants are, the easier it will be to determine their sex and to choose them based on your needs. You can even speed up the flowering process to ascertain it as soon as possible. To do this, if you have a greenhouse, you can leave the plants in the dark for a couple of days and see the changes that take place. Remember that cannabis plants require a long period of darkness to activate the hormones indicating the shift from vegetative growth to flowering.

Although the key is in that cycle change, some growers use a trick: letting the plants get used to the dark for a period of 36 hours straight, and then commencing a 12/12 photoperiod. If you notice that your plants do not begin to blossom as you hoped, you can increase the hours of darkness.

Under normal conditions, without using forced flowering, sex determination can be performed as soon as cannabis reaches the pre-flowering period, which occurs between the fourth and sixth week of growth. There are also various techniques to bolster the growth of female plants. For example, maintaining high nitrogen and low potassium levels, or using blue light and low temperatures during the first two weeks. Although these are certainly useful tips, do not forget that they are only techniques that increase the likelihood that the plant will be female, but they do not guarantee it 100%.

We summarise some of these guidelines to favour the emergence of female plants and, in general, the health of your crop during its early stages:

These tips aside, if you really want female plants for your crop, the most effective way of all is to simply opt for feminized seeds from the outset. Most people who grow feminized cannabis seeds enjoy the advantages of knowing their favourite strains from the beginning of the process, without having to germinate more seeds than they ultimately want to grow, or having to worry about their sex.

These are strains that virtually guarantee the production of female plants (99%), yielding cannabis plants containing only female chromosomes (XX). This has led to a dramatic spread and acceptance of these seeds in recent years, as they make it possible to expedite the process and avoid losses of space, time and money.

However, to remove the slightest possibility of your plant developing as a male or hermaphrodite, cloning is a failproof best option. Given that the cutting receives 100% of the characteristics of the mother, if you know you have a female, all the clones you grow will also be.

You know the sex. Now what?

Now comes the time to make certain decisions, because if your plants are male you run the risk of spoiling your crops for consumption. If you are someone who prefers to buy seeds, and does not want to complicate your life experimenting with genetic crosses, it is best to just get rid of them and keep the females. Pollen from male plants can very easily impregnate females around them, filling the harvest with seeds and reducing the quality and quantity of the buds. This is because the flowers that have seeds inside them cannot be used for consumption in the same way, as well as tasting worse, and having much less THC.

It is also necessary to note that pollen can travel up to several kilometres, so it will not be enough to separate your male plants a few meters. Therefore, once you're 100% sure that they are male, it is best to get rid of them.

Avoiding the confusion of hermaphroditic plants

Sometimes cannabis plants present us with another problem. Although it is very rare in cannabis, you may encounter hermaphrodites; that is, plants of both sexes. This is difficult to detect, as they present symptoms indicative of both. At first they flourish like females, and one can see stigmata, but over time they develop some flowers or branches typical of a male plant, which complicates your task. 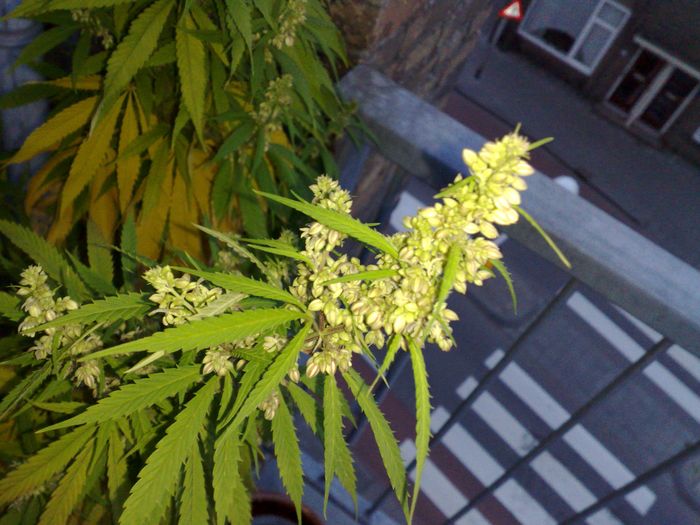 Some hermaphrodite plants are so for genetic reasons, or due to conditions to which they are exposed. In these cases stress increases the risk of hermaphroditism. This can be caused by multiple factors, such as the change in photoperiod, excessive heat, pests, diseases, or even the use of very aggressive pesticides. Therefore, it is essential that your crop benefit from the best care, in order to reduce the chances of hermaphroditism.

How to deal with hermaphroditism

If the plant begins to show signs of hermaphroditism, all is not lost. It depends on the stage the plant is in. If it is in the beginning of the flowering stage, you will be forced to remove it from your growing space immediately. 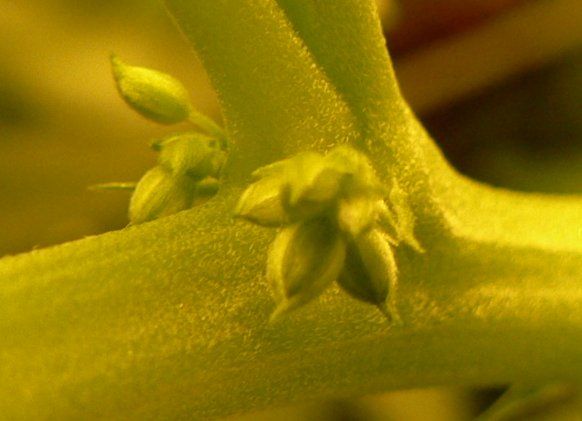 If it becomes hermaphroditic in full bloom, on the other hand, you can fix it in two ways, depending on the pervasiveness of the male plants. If few male flowers are produced, just remove them with some tweezers. After extraction, spray the rest of the crop with water in order to remove the pollen that might exist and, after that, watch them closely so they do not reappear.

If there are lots of male flowers, the solution is to eradicate the plant. Finally, if the transformation occurs at the end of the flowering stage, you will want to rush the harvest to prevent the male flowers from releasing pollen and spoiling the quality of the buds.

In either case, the important thing is to be aware of your plants, both to know their sex from an early age, and to remedy a sudden change in it. Now that you know how to distinguish males and females, and how to act at all times, good cannabis crops are guaranteed.