Dinafem Seeds' catalogue keeps growing with more and more stable hybrids that bring value to any self-respecting garden. First, with the launch of all the possible versions of one of the most heartily welcomed strains of 2018: Gorilla. A year later both her CBD version and autoflowering versions have arrived: the former to make the amazing taste of this resin yielder available to those who didn't dare try the original strain due to her mind-blowing potency, and the latter for the ones who don't like depending on photoperiods and prefer growing autos. And, of course, her Quick version with Quick Gorilla, for growers into feminised seeds who need everything to move fast.

To top it off, a very special strain derived from an extensive breeding process: Dinamed Kush CBD Autoflowering. Thanks to legalisation and to the increasing recognition of the medical applications of cannabis, recent years have seen rapid advances in the field of CBD. Still, the creation of a pure CBD strain that looked like her THC counterparts in terms of structure, flavour, and aroma had not yet been accomplished. But now, with Dinamed Kush CBD Autoflowering, it's already a reality. In fact, she's one of the tastiest pure cannabidiol strains on the market. Nothing to do with the CBD genetics so far created, with resembling tastes. This one is not only flavourful but incredibly easy to grow too, for she's a full-on autoflowering.

And, finally, barely a month after the launch of Blueberry Cookies and Ocean Grown Cookies, Dinafem Seeds' Autoflowering line has a new addition with the very same fruity and Kushy taste as her two predecessors plus an extra burst of speed and resistance.

Gorilla CBD: an Indica capable of taming the potency of Gorilla while keeping her taste intact

Gorilla CBD is a feminised cannabis seed that holds on to the morphology, unbeatable resin yield, and delicious Kush taste of Gorilla but reduces the narcotic effects with a 1:2 THC:CBD ratio. Dinafem Seeds' Gorilla was warmly welcomed when she hit the shelves in 2018. People rushed to make her part of their tents and gardens. Only those who preferred less devastating strains decided it was wiser to stay away from this incredible cannabis jewel. And it's for them that we've created this CBD-rich hybrid. So they can not only witness the show set up by this lime-green plant whose thick flowers turn almost white in the final days of the flowering phase but also enjoy the magical earthy and fuelly taste of Gorilla without fearing the sofa-anchor effect typical of her. 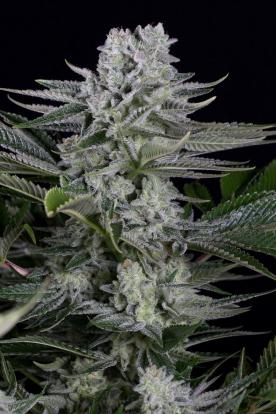 Gorilla's mind-blowing potency and extraordinary resin yield have earned her a well-deserved place among Dinafem Seeds' favourites in just one year. The greatest trait of this Indica-dominant THC-packed strain is the thick blanket of white trichomes covering her flowers in the closing days of flowering. Is there anything we could add to such a fantastic strain? Speed. But without affecting her true essence as a feminised plant. She's equally capable of producing large amounts of flowers and resin. She just does it much more quickly. This is exactly what Quick Gorilla offers: yields than could be mistaken for those of her predecessor in less than 56 days. 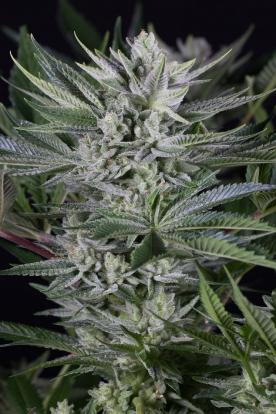 Gorilla Autoflowering: same potency and taste as her feminised sister, in autoflowering version

The autoflowering version of Gorilla is an autoflowering cannabis seed that meets the needs of growers living in regions with cold climates and short summers. This automatic version of the super-potent Gorilla adds an extra dose of strength and sturdiness to her feminised predecessor with the Ruderalis genes in her and grows as quickly as any self-respecting autoflowering plant. Those of you who haven't given Gorilla a chance fearing winter would arrive too early for your buds to be ready and simply don't like depending on life cycles but still want to cultivate a high-potency cannabis jewel will find in this strain their perfect match. A strain whose autoflowering nature doesn't undermine the original thick resin yield or the intense gassy aroma and extremely narcotic effect of one of the most devastating Indica genetics ever to be created. 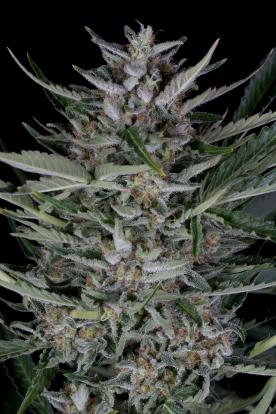 Cookies Autoflowering: the quickest and easiest way to grow the tastiest U.S. scents

This autoflowering cannabis seed contains each and every one of the amazing traits of the world-renowned Girl Scout Cookies enhanced by the sturdiness and speed of OG Kush Autoflowering. Mid-sized and bushy, her autoflowering genes make her an ideal candidate for growing in temperate climates, way more than her feminised version. Outdoors, she's more likely to thrive in regions with short summers, while indoors less time and effort is needed for her to be ready as flowering kicks off around 30 days after germination. Her amazing speed, however, doesn't undermine the initial euphoric effects that turn more calming over time. Nor does it affect the complexity of this brand-new Kush with earthy and fruity nuances that has truly revolutionized the global cannabis market. 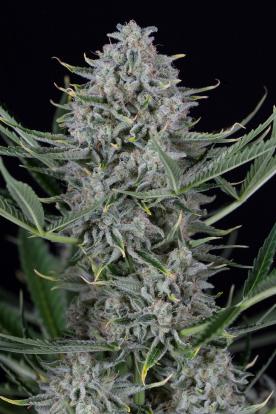 What's most striking about this Indica-shaped plant with strong Kushy aromas and intense tastes is that, instead of a psychoactive high, she delivers the deeply relaxing feel pure CBD genetics are so famous for. How could this be? Because she has almost no trace of THC. And, all this, at the speed of light and with no major growing difficulties, thanks to her autoflowering genes. Dinamed Kush CBD Autoflowering debunks the common belief that autoflowering hybrids yield virtually no resin and that all pure CBD strains have the same flavour.

In fact, her thick resin yield and high levels of limonene terpenes make her as extraordinarily Kush as the very same Bubba Kush. So much so that it's almost impossible to tell, with a quick look, whether she's a THC or CBD plant. No wonder, in view of all these reasons, Dinamed Kush CBD Autoflowering is one of the most innovative plants on the cannabis market today. In short, a pure CBD variety with the very best traits of one of the top-sellers: Bubba Kush. 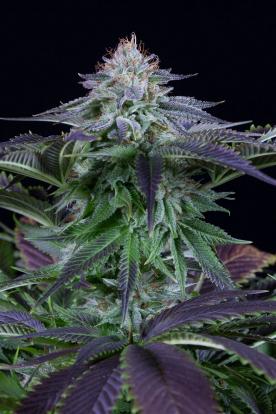 Mixing an elite clone of Girl Scout Cookies with an OG Kush was a pretty safe bet: the result could only be an incredible cannabis champ. And that's exactly what she is. Like any good Indica-dominant hybrid, she turns into mid-sized, bushy plants with rather ample internodes that may, however, require the use of stakes to make sure the main stem receives plenty of light.

Despite the overall Indica-like growth pattern, her nuggets are not round. Instead, they're cone-shaped and elongated, with a high degree of compactness. Heavily crystalised clusters giving off an overwhelming aroma.

In fact, her taste and her potency are the most important features of Ocean Grown Cookies. With THC levels pushing far past 20% and almost no CBD, her effect is powerful, long-lasting, and narcotic. This head and body crushing wave that has wreaked havoc in California with Kush at the forefront and the fruity Girl Scout Cookies in the rear. 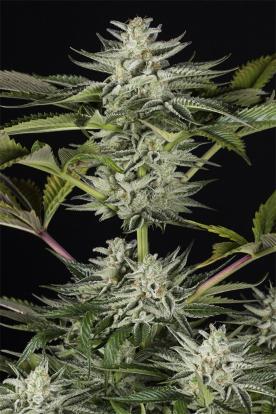 Maximising the sweetness of the Kush scent was this strain's main goal. We wanted to make a completely new and different Kush. It was our fervent desire to take the most cherished U.S. taste and to add some fruity nuances to her. That's why the breeders at Dinafem Seeds picked Blueberry.

The cross of Girl Scout Cookies and Blueberry has given way to a vigorous and slender marijuana plant, endowed with beautiful purplish hues, that loves stretching upwards. Despite her extreme vigour, she doesn't require heavy feeding although she does need some additional space to grow comfortably.

Her buds are large, spiky, incredibly thick, and full of gooey trichomes. The most distinctive trait of this strain is, without a doubt, her scent. She smells like a fruit pie with a Kush base. However, the sweet nuances of traditional Kush genetics prevail over the earthy ones. Her effect is still a classic, though: powerful, physical, and relaxing. 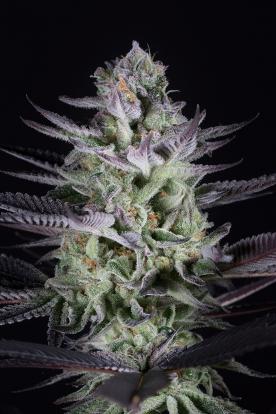 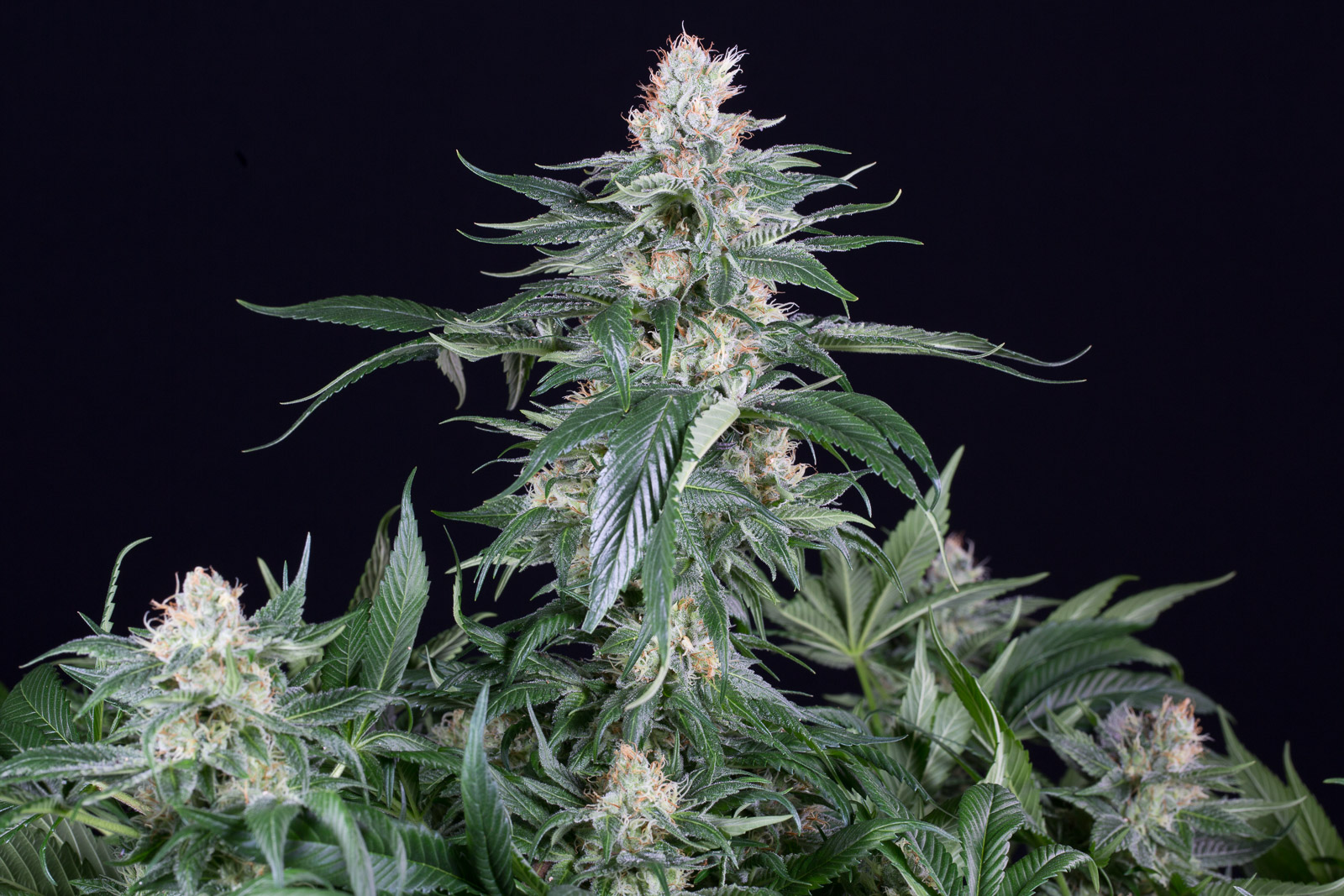 Orange Juice is one of the most refreshing cannabis strains in our catalogue. Sativa-leaning, with thick and spiky flowers giving off a ground-breaking aroma of tangerine never seen before in a cannabis plant. Her rich terpene profile is, without a doubt, her most distinctive feature. That's why growing Orange Juice is like growing a seed whose terpenes have been taken to a whole new level in terms of quantity and of quality. And, all this, accompanied by a highly relaxing and moderate high.

She's indeed a Sativa-looking plant with long leaves and ample internode spacing. Given her vigorous growth, it's very important to monitor her, though, especially during the start of the flowering stage, for she may double in size and catch you off guard. Cutting off the lower branches is also recommended since it will allow the plant to redirect the energy to the main central cola and top side branches. 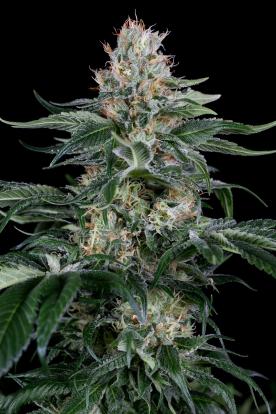